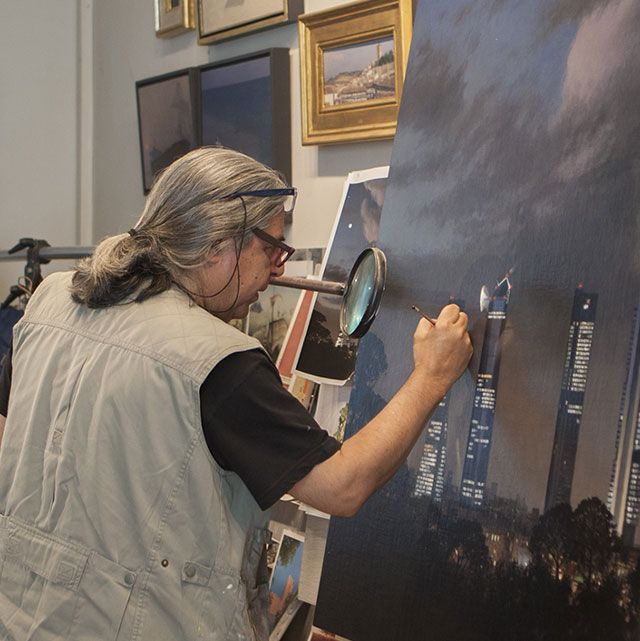 “I paint the universe of men, of objects, and of their surroundings. I paint scenes that fly over the world as if they were loose pages from an imaginary travel journal that unavoidably feel real.”

Born in Chile, Guillermo Muñoz Vera (B. 1956) is best well-known as a Realist artist that actively combines his artistic expertise with theoretical studies.. He is considered one of the greatest examples for the genre of New Spanish Realism and has shared a gallery with various founders of the North American hyperrealist and photorealist movement. (Read More)

He graduated in Fine Arts with a distinction in Painting and a scientific thesis titled, “Light, Vision and Matter,” which he obtained the highest distinction. In 1979, he held his first solo exhibition in Chile with the sponsorship of the Ministry of Education entitled “Trabajos de Oficio.” After traveling to Madrid to complete his academic training he was appointed to the position at the University of Chile as Adjunct Professor of the Chair of Drawing.By 1980, Muñoz Vera returned to Spain, furthering his studies and traveling throughout Europe. Officially setting in Madrid, he began connecting with various galleries and dealers, participating in numerous individual and group exhibitions and contemporary art fairs, mainly in Germany, Italy, the United States and Spain.

As he further established his place in the artwork, he amassed critical success and the text for his first monographic book was written by chief curator of the Prado Museum Matías Días Padrón, an expert in 17th Century Flemish and Dutch painting.

With a fondness for teaching, Muñoz Vera created ARAUCO (Arte y Autores Contemporáneos). This is a project that actively collaborates in the management and sponsorship of non-profit educational and cultural activities, with the creation of teaching workshops, Visual Arts competitions, exhibitions, summer courses and study grants for young painters.

Presently, he lives in Spain.