THE COLORS THAT REMAIN

HOUSTON, TX (July 31, 2020) – Art of the World Gallery is pleased to announce its upcoming exhibition of the year, The Colors that Remain, starring the leading female contemporary Spanish-Dutch artist Lita Cabellut. The striking and compelling solo-show debuts on August 5th and will be on view until October 3rd, 2020 at the gallery located in the River Oaks area, at 2201 Westheimer Rd. Houston, 77098.

The Colors That Remain solo exhibition launches the preeminent Lita Cabellut (B.1961) to United States audiences for the very first time with a unique solo show comprised of 27 extraordinary artworks in different mediums and remarkable formats. A skilled multidisciplinary artist, she renders portraits of fictional and historical characters utilizing a modern version of the Renaissance fresco technique, which she has perfected over decades. Her art is defined by large-scale portraits and iconic craquelure effects, creating works that embrace all facets of life, positive and negative. She paints her own universe that embraces and highlights the evolutions people undergo, capturing the pain of undesirable experiences, beautifully emphasizing the imperfections of the human body and vulnerabilities of the soul, and acknowledges the physical and psychological transformations through colors and textures.

In this exhibition, the audience will observe and admire the carefully curated selections of her artistic process and recognize the implications of the colors that were purposefully left on the composition until her final phase of deconstruction. Every part of Cabellut’s process is both meticulously planned and spontaneous. Her manipulation of the canvas enhances the beauty of the character’s story bringing them to life and giving light to their success and failures, their solitude, their hidden dreams, the passing of time, and even death. This solo show asks spectators to be inquisitive, empathetic, and cognizant of the more philosophical expressionist side of art.

Lita Cabellut grew up as child on the streets of Barcelona as an orphan until the age of twelve when she was adopted by a Catalan family. Their frequent travels to Madrid and visits to important museums like the Prado Museum, inspired her to pursue a career as an artist, becoming greatly influenced by masters like Francisco Goya and Diego Velázquez. At the age of 19, she decided to move to her present country of residence, The Netherlands, where she attended the Gerrit Rietveld Academy in Amsterdam, further studying Dutch masters. Her experiences have culminated in a successful career with art that mirrors her life experiences. Cabellut’s spectacular works on canvas questions all qualifying concepts of beauty and searches to redefine it with a greater sense of humanity and objectivity.

Beyond Cabellut’s monumental paintings, her passion and exploration for fine art includes drawings on paper, sculptures, photography, scenography installations, poetry, visual poems and videos. A love for poetry further fuels her connection to developing a more visual language, as she says, “If my brushes were not able to speak; if my feet were not able to take a step forward or back, to gain perspective on what I see, I’d have no name.”

Each and every single one of Cabellut’s artworks can be considered as extensions of her soul. Besides the original works on display at Art of the World Gallery, there will also be a limited-edition artist book available. Bodas de Sangre is a monograph that unites art and literature in a series of 31 drawings created especially by Lita Cabellut, through the prominent international art publisher, ARTIKA. In a collaborative effort due to COVID-19, ARTIKA, together with Art of the World Gallery, will donate $500 USD per each book sales to support Art League Houston (ALH), a non-profit organization in need of donations to continue with its projects in the community and promoting local artists. 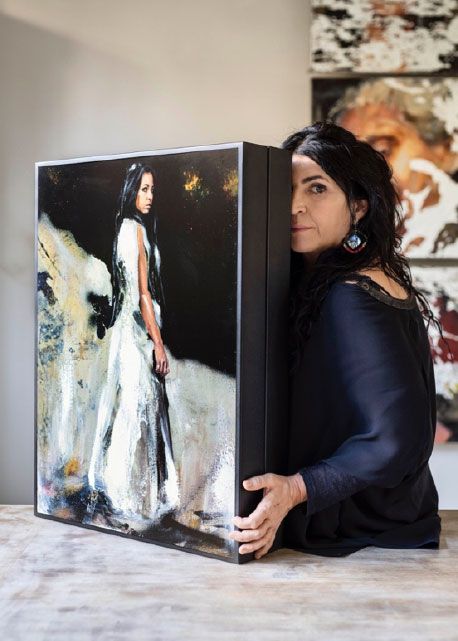 ABOUT ART OF THE WORLD GALLERY

Art of the World Gallery is a 6,500-square-foot blue-chip gallery located at 2201 Westheimer Road in the River Oaks neighborhood of Houston, Texas. A leading modern & contemporary art gallery, representing some of the most influential living artists and masters of the 20th and 21st Centuries from around the globe. Art of the World Gallery is known for developing dedicated relationships with renowned artists, acquiring the majority of inventory directly from them or their estates. Featuring a prominent art collection comprised of works by masters including Marc Chagall, Pablo Picasso, Joan Miró, Robert Indiana, Wifredo Lam, Rufino Tamayo, Fernando Botero, as well as, acclaimed and cutting-edge artists like Cristóbal Toral, Carole A. Feuerman, Manolo Valdés, Julio Larraz, Sophia Vari, Javier Marín, Chung Kwang Young, Mr. Brainwash, amongst others. With more than 20 years of experience in the art business, Co-Owners & Directors, Liliana Molina and Mauricio Vallejo, select their artists and artworks with diligence and integrity, considering the positive impact of art in any space and offering an accessible and transparent approach to art collecting. Dedicated to providing a memorable experience the gallery offers private, public and corporate art consulting, curatorial design, packing, transportation and installation services, as well as a top-venue available for private and corporate events.

The gallery’s exhibition — The Colors that Remain— begins August 5th through October 3rd, 2020. No entrance fee is required. Art of the World Gallery is open to the public Monday through Saturday from 10:00 a.m. to 7:00 p.m., and Sundays by appointment only. For more information, please visit www.ArtoftheWorldGallery.com or call 713-526-1201. Follow us on social media: Facebook, Instagram, LinkedIn, and Twitter.