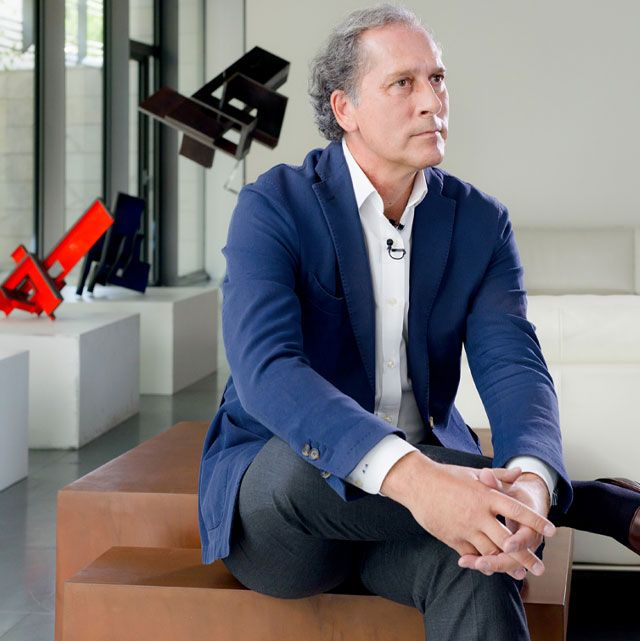 “A straight line for some can seem boring and uninteresting, but for me it comes alive. I wish the straight line would think of me a tenth of the time I spend thinking about it.”

Spanish artist Arturo Berned (B. 1966) is an architect and sculptor whose work is based upon the rein­terpretation of both shapes and space, through a geometric language.

Mathematics, the Euclidean space, the golden ratio are tools used by him in his works; he uses geometry as a basic tool to understand the world around us, the physical world and the world of the senses.

Steel, the material with which he produces most of his sculptures, allows him to create a very per­sonal formal universe.

Balance, light, mass, emptiness, contradiction, touch, dialogue, tension… are the tools and ar­guments of his work.

He understands and uses the sculpture as an or­ganizing element of space, facilitating its unders­tanding; the scale, the size, the arrangement, the form, contributes to creating a complicity between architecture and sculpture.

Graduated in 1993 with a Degree in Architectu­re in the Superior Technical School of Architec­ture, with extensive experience as an architect in Spain, United Kingdom and Mexico, until his last period as Director of the Projects and Wor­ks Department at the Lamela Studio, it was in 2000 that he began to seriously and exclusively follow his vocation for sculpture.

During these years he has produced an inten­se body of monumental works which is one of the identifying marks of his artistical proposal. Sculptures that integrate into urban spaces or buildings creating a dialogue with the city, architecture and sculpture.

Some of his most notorious interventions are the first prize in the international contest “Sculpture Door Loewe” in 2000, or the exhibition at the IVAM Museum during 2012, which hosted more than 50 of his sculptures in different formats.

In 2013 he was selected to be the first Spanish artist to submit his version of the classic ´Lady Dior` bag in the exhibition ´Lady Dior As Seen By` presented in Hong Kong; shortly afterwards, in 2014 he was chosen to represent Spain in the ´Dual Year – Spain-Japan` in Tokyo and Fukuoka, and it is worth mentioning his recent intervention at the Ritz Carlton Hotel in Los Cabos, Baja Ca­lifornia.

He has participated in several fairs and exhibi­tions such as ARCO in Madrid and Lisbon, ART­BO in Bogotá, ART BASEL in Hong Kong, ART MIAMI in Miami among others, and installed many artworks in countries such as Spain, Mexi­co, Japan, Dubai, United States, and China.