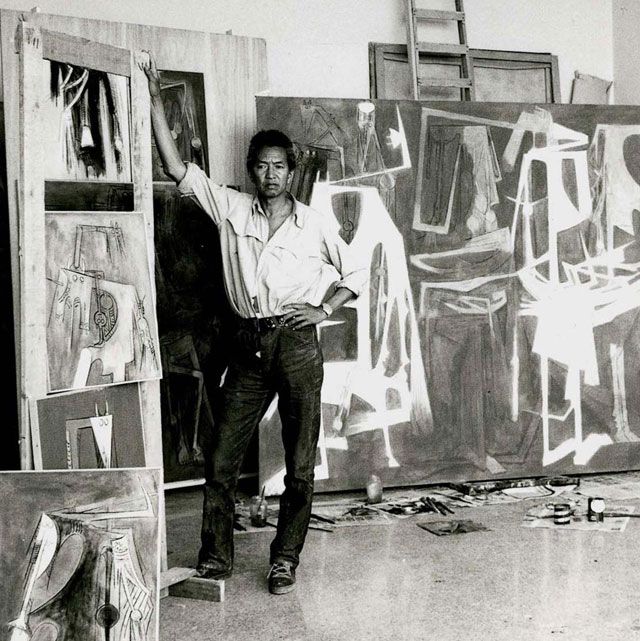 “My painting is an act of decolonization not in a physical sense, but in a mental one.”

Wifredo Lam (1902-1982) was born in Sagua la Grande, Cuba, and eventually moved to Havana where he attended the School of Fine Arts. Shortly after, he left for Spain in 1923, where in Madrid, he studied at the studio of Salvador Dali’s teacher, Fernando Alvarez de Sotomayor. (Read More)

With an increased interest in artist Pablo Picasso, whom Lam worked with, he was encouraged to study primitive art. Surrounded by the artistic movements rising in Europe at the time, the effects of Surrealism are evident in his work. As a person of mixed heritage, the son of a Chinese father and a mother of mixed African, Indian, and European descent, Lam became heavily influenced with a religion called Santería. The blending of various traditions and beliefs is evident in Lam’s work and his signature muted palette is well recognized around the world.

Lam exhibited his work alongside Picasso at the Perls Galleries in New York and there’s been many retrospectives on his work in museums worldwide. He is known for his fusion of Surrealism, Cubism, and elements of Caribbean culture. He developed a new awareness of Afro-Cuban traditions and focused on evolving his style that sought to show humanity.

In 1964, he received the Guggenheim International Award and his work has been acquired and exhibited in major museum, including Centre Pompidou in Paris, France; The Museum of Contemporary Art, Chicago, Illinois, The Museum of Modern Art, New York City;  Museum of Fine Arts, Boston, Massachusetts; Museum of Modern Art, Brussels,Belgium; Museo Nacional de Bellas Artes, Havana, Cuba; and the Indianapolis Museum of Art in Indiana, USA. He passed in 1982 with well more than one hundred personal exhibitions.